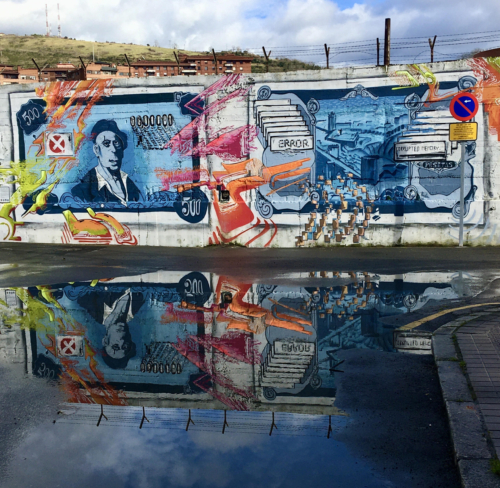 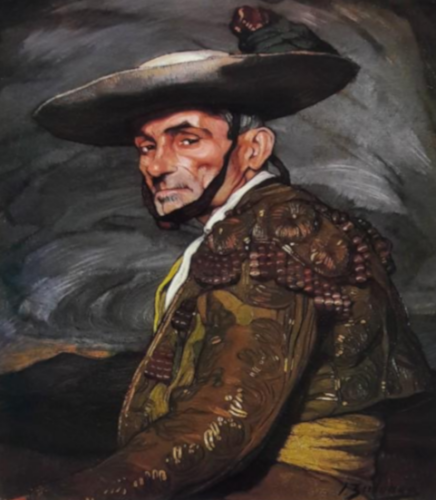 The aim of this text is to provide readers with a brief insight into the personality and talent of this painter.

An intention that requires a closer look at his life and background.

Four generations of Eibar artists that bind him inextricably to the land despite an irresistible urge to seek new horizons.

Drawing and painting are stronger than paternal pressure, leading him to break the ties that attempted to force him to become a mining engineer.

A break that would lead to a temporary distancing from his father, Plácido Zuloaga.

The Basque Country’s booming economy, reflected in the urban development that sprang up from the second half of the 19th century onwards, would provide work for architects and sculptors alike. Yet the days of wine and roses for painters had not yet arrived.

On leaving Eibar he headed for Madrid and the Prado Museum, where he studied the great masters of Spain’s Golden Age. When he believed he had acquired a certain knowledge, he travelled to Rome, where he spent a few short months, and then London, before finally settling in Paris in 1889. Paris is the European capital of the arts, pitted with obstacles for young and aspiring artists, forcing him to seek the aid of his compatriots. It was the home of Uranga, originally from Vitoria, Durrio Granier from Valladolid, the Asturian Regoyos, who joined the Catalonian clan made up of Rusiñol, Casas, Pichot, … closely linked to French artists such as Gauguin, Dethomas, Blanche, Toulouse-Lautrec, as well as his early masters, Henri Gervex and Carrière. He was admitted to circles such as those of the forward-thinking Madame Bulteau – influenced by Maxime Dethomas, who would later become his brother-in-law – that attracted artists and literary figures such as the Countess of Noailles, Loti, Barres, Heredia, the aforementioned Blanche, Pierre Louÿs and Léon Daudet. He would forge a lifestyle that was at once cosmopolitan and plural in terms of languages, customs and opinions.

Neither the misty hazes of his homeland, nor those of the River Seine added a sense of colour to his palette. Two factors were at work on Zuloaga’s art, namely the tastes and preferences of others, and his own, which were radically opposed. The Spanish panel of judges rejected the works he presented for inclusion in the 1890 World Fair in Paris. On the subject of this snub and his ties with France, Darío Regoyos wrote the following in a letter to the artist: I cannot blame you for getting out of the sticks. The whole of Spain is an immense quagmire from which we should save the people, the towns and the countryside, but never surrender our works to judges who are unable to see beyond the ends of their noses…

Between 1893 and 1898 he worked in Andalusia. His paintings are Spanish, yet “speak to us in French”. In 1898 he would discover the firm roots of his masters that inhabit the rooms of the Prado Museum in Segovia. He would go on to spend sixteen years living and working in the Castilian city. He was no longer willing to hand over his works to ignorant judges; instead, he himself would take them to the great exhibitions of Europe.

In 1902 he was appointed a member of the Paris National Society of Fine Arts. Auguste Rodin would address him as “my esteemed master”. Zuloaga triumphed at a joint exhibition with Rodin in Düsseldorf in 1904. The doors to Europe were suddenly flung wide open. The virtues of his work would be extolled on his successive appearances at the Paris Fine Arts Salon. In 1909 he sent a selection of his works to the United States for what would be the first of four immensely successful exhibitions. The last of these, which lasted from 1924 to 1925, would tour several States before moving on to its final unprecedented triumph in Cuba. Meanwhile, Mexico, Argentina and Chile all sing his praises, and he received the Grand Prize of Venice in 1903 and the King of Italy Prize from Rome in 1911. (His friends and neighbours would organise a celebratory banquet on 6th January 1912, a tradition that would be aped by a number of artists resident in Madrid in 1914 to celebrate his numerous successes).

By this time his works were hanging in some of the leading national museums around the world; they had been acquired by some of the most knowledgeable collectors and he was much in demand as a portrait artist. His works are scattered around Europe, from Saint Petersburg to Budapest, from Berlin to Triste, from America…as the title indicates, we are dealing with a truly universal artist.

The Duke of Alba commissioned the artist to paint not only himself, but also his wife and daughter in a series that would open up a whole new world: that of the Spanish aristocracy. He was also in demand from the worlds of industry, trade and finance, earning him a reputation as Spain’s finest portrait artist.

This glorious period was marked by a return to his native Basque Country. After hunting up and down the Cantabria coast, he eventually purchased land on which to build his home, museum and studio in Zumaya, just a short distance from Eibar.

It is time for rest, revelling in the company of his family and the friends that visit the Santiago-Echea estate. A time for quiet reflection on the earlier, more difficult times in Paris, Andalusia, Segovia, “the city that had helped him, in that secret and inexorable manner in which environments can shape a man, to achieve glory and fame”.

He revels in these well-deserved riches – glory and fame – by the sea. The sea is everywhere, except on his canvases (apart from two brief, almost mandatory references that can be found in his collections). He confesses “I miss and yearn for […] that which is powerful, robust, harsh and even bitter […]Castile has shown me the totality of its light and shadows, its bold contrasts of blues, reds and yellows, and the incomparable shades of grey of its distant hazes; the cornerstones of those defining settings and the only integral landscapes that have formed a constant presence on my palette”.

At last in 1926, he was received in an official audience attended by the King and Queen of Spain.

In Zumaya he revelled in the opportunity to portray the members of his family; his friends Quintín de la Torre, Beobide, Alcorta and Basilio Iraizoz to name but a few. He also created an album featuring Spain’s most breathtakingly beautiful landscapes, as well as numerous still lifes and compositions.

He is sorrowed by the death of his dearly-beloved “brother” and fellow artist Pablo Uranga. In his grief, he asked Paco Durrio to cast a medallion bearing the image of their mutual friend. One October morning, after a busy summer welcoming countless friends and visitors to his studio, he quietly made his way from Zumaya to nearby Elgueta – where they had spent many hours painting together – to place it on the public fountain with his very own hands. In symbolic terms, it represents a journey to acknowledge a whole series of artists who learned their trade in the much-loved valleys and mountains of his homeland.

Yet it was time to return to Madrid, to Las Vistillas studio, where much unfinished work awaited him. It would be a matter of days, merely hours for him to be proclaimed by his fellow men, “the most international Basque artist of all times”.

We use cookies on our website to give you the most relevant experience by remembering your preferences and repeat visits. By clicking “Accept”, you consent to the use of ALL the cookies.
Cookie settingsACCEPT
Manage consent

This website uses cookies to improve your experience while you navigate through the website. Out of these, the cookies that are categorized as necessary are stored on your browser as they are essential for the working of basic functionalities of the website. We also use third-party cookies that help us analyze and understand how you use this website. These cookies will be stored in your browser only with your consent. You also have the option to opt-out of these cookies. But opting out of some of these cookies may affect your browsing experience.
SAVE & ACCEPT